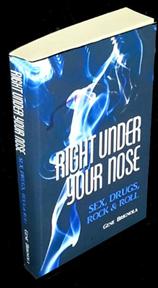 About Right Under Your Nose

"Right Under Your Nose”- Sex, Drugs, Rock and Roll was originally titled "NASCAR on Broadway" because the main characters raced through the streets of New York City like they owned them. I was writing about characters that grew up in a small town on the Jersey shore who became involved in the acquisition, possession, transportation and distribution of recreational drugs on a huge scale. However, I knew that it didn't reflect the true essence of the book. I also felt that reader might think it was about a Race Car or possibly a Hot-Rodder’s experiences! I finally decided it would be my version. 1, until I came up with the inspiration for the "real title". Well, it took a while but it finally came to me one day when my wife told me to tell it like it is...

Listening is an important part of relationships. I highly recommend it.

From the beginning, I wanted to tell the true story, full of action with enough description to give the reader a look at what was going on as the events unfolded but allowing the imagination to complete the rest. I hope that I have succeeded. It is with a profound sense of respect and gratitude that I thank you for taking the time to read my book.