"LOYALTY ABOVE ALL ELSE"

Signed/FIRST EDITIONS are currently being  SOLD  $19.95

For a Signed FIRST EDITION,

The continuing story in the RIGHT UNDER YOUR NOSE Trilogy that began innocently in the late 60's and turned a few teenagers into the Carnegies of the Hippie Counter Culture.

Beginning with a Birthday present that turned into a Pandora's box of sensitive but damaging information not only surprised but shocked it's recipient a retired DEA Agent and his wife.

“LOYALTY ABOVE ALL ELSE", The TRUTH, Beyond the Lies, is an accurate account of the events that helped mold recreational drug use in the late 60's and early 70's in the USA.

James Briggs is an accidental entrepreneur chasing the American Dream in the late 1960s.  In the 2nd book of the Right Under Your Nose trilogy, Gene Brignola chronicles James’ escapades as he flies coast-to-coast and across continents to further his ambition.  The story includes escape from a burning building; illegal entry to a foreign country, via a war zone; and dodging bullets from irate property owners.  When James finally lands in jail, he decides it may be a good time for a career change, but he is going to have to rely on the loyalty of his confederates and confidants to make that happen.

“Loyalty Above All Else” is an inside look at the sex, drugs, rock and roll counter-culture of the sixties.  It provides an authentic look at the lives of young men and women living through the turmoil of that era against a background of history, politics, and music from a decade that changed the course of a country.Type your paragraph here. 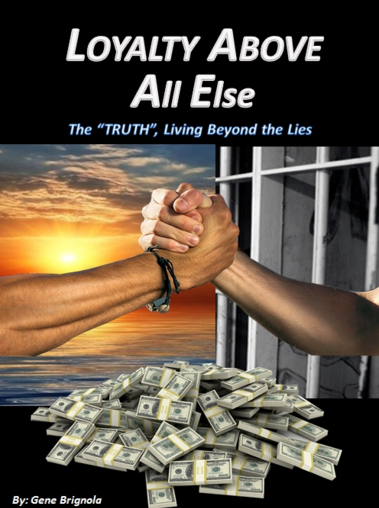