The first book published to include QR-codes* photo imaging. 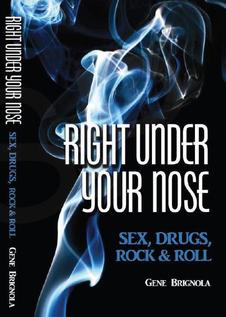 RIGHT UNDER YOUR NOSE - Sex, Drugs, Rock and Roll is a twisting story that began in 1965 when two teenagers left a small town on the Jersey shore for a college 1000 miles away from their home. In less than five weeks, a set of unforeseen circumstances' changed both of their lives.

One abruptly left school and enlisted in the Marines, only to be wounded nine months later in Vietnam. Surprisingly, after two years of intense rehabilitation he managed to recover and was on track to live out the America Dream.

The other remained in college for the remainder of the year only to be forced to return home in need of surgery.  During his recovery he enrolled in a local college to avoid the Draft and soon after graduation found himself in an unfortunate and uncomfortable situation. In his search for a resolution, he was advised and mentored by a stranger who provided him with at that time the only viable solution.

It was only a matter of time for him and his new associates to emerge as the Carnegies' of the hippie counter culture.

The rest is history...